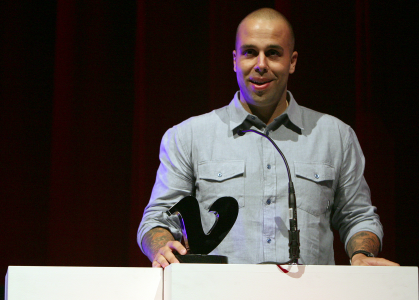 Nine Video Categories, Two Honorary Award Winners and One $25,000 Grant for Best Overall Video
Online video sharing site Vimeo®, an operating business of IAC [NASDAQ: IACI] tonight announced the winners of the Vimeo Awards at a gala awards ceremony hosted by Ze Frank at the SVA Theater in New York City.
“We developed the Vimeo Festival + Awards to recognize the people behind the most original creative videos on the Internet and give them a venue to learn from and inspire each other,” said Blake Whitman, Co-Director of the Vimeo Festival + Awards.  “We received such incredible enthusiasm for this inaugural event, and the quality of the work that people have submitted has been incredible.

The Vimeo Awards is a clear reflection of the influence and growth of high quality video available on the Internet.”
Submissions spanned the spectrum from traditional filmmaking to the use of emerging technologies.  The inspirational winners in the nine categories are:

A distinguished panel of judges—including  M.I.A., David Lynch, Roman Coppola, Ted Hope, Lucy Walker, and Morgan Spurlock, to name a few— chose the winners  from more than 6,500 entries submitted from around the world. Legendary cult Director David Lynch, who judged the Experimental Category of the Festival commented, “The quality of films I watched for the Vimeo Festival was A Number One.”

Roman Coppola, film Director and founder and owner of The Directors Bureau, who judged the Music Video Category of the Festival added, “There is some really inventive stuff out there and I appreciated having a window into the creative work that people are producing.”

Vimeo Award for Best Video: “Last Minutes with ODEN” by Eliot Rausch chronicles the last minutes of a dog, Oden, who loses his struggle with cancer.  It is a deeply personal story, told from the perspective of Oden’s owner Jason Wood.  The film was shot using a Canon 7D by Directors of Photography Luke Korver and Matt Taylor.  Vimeo them with the Best Video Award along with a grant of $25,000 for the purpose of making a new, original work.
Morgan Spurlock, a judge in the documentary category said, “I am so happy to take part in this acknowledgement of independent filmmakers from around the world.  It is definitely time for the online creative community to be celebrated.”

Jeremy Boxer, Co-Director of the Vimeo Festival + Awards reflected on the Best Video winner, “‘Last Minutes with ODEN’ is one of those rare, intimate shorts that leads with its heart and soul. The film has been crafted with superb skill and is a testament to the new generation of creators that use small cameras to tell personal tales. We are thrilled that this project has been selected as our overall winner and recipient of the first Vimeo Awards filmmaker grant.”

Honorary Awards for Digital Maverick, spotlighting an individual for pioneering spirit in the world of online video, went to the Neistat Brothers, who have been making films and posting them online for the past decade.  The Feature Presentation award, honoring the vanguard and innovative release of unique feature film online, went to Star Wars Uncut (2010 Interactive Emmy winner), which took an iconic film and the online video community to collaborate in a way that has not been seen before.
About Vimeo, LLC

Leading video sharing site Vimeo® provides the easiest way for people to host and share their videos in high quality.  The site provides great privacy features and inspiring videos from a vibrant, respectful community of creative users who care about how and where they show their work. Launched in 2004 and headquartered in New York, NY, Vimeo offers users a video sharing experience that is both entertaining and easy to use. Vimeo is a 2010 & 2009 Time Magazine Top 50 Website. Vimeo, LLC is a subsidiary of IAC (NASDAQ: IACI).
###